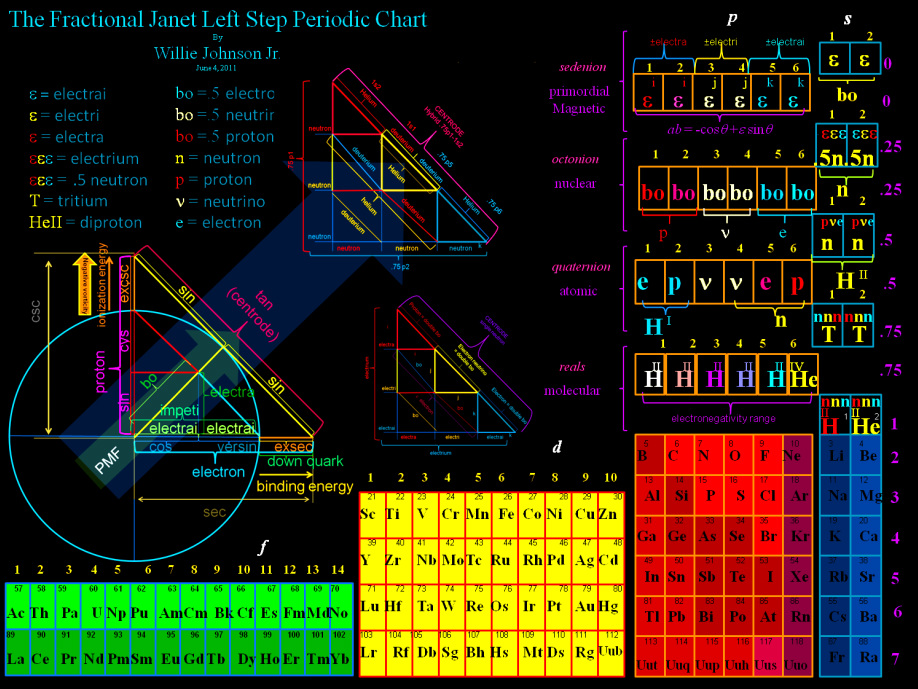 A GFT Caley -Dickson Interpretation of the Periodic Chart

Refer to the above chart. Starting at the origin of our Cartesian axes the lowest ground state, 0s0, is zero. It is the most stable of all orbitals. At the 0sp levels we form various forms of bo from the electrium. At the zero origin we place a neutral boson, the bo. All subsequent generated particles issue forth from this particle.  At 0s1 we place the vector electrai and at 0s2 the scalar electra. At the 0p1-6We then generate six tovacian interactions, electra  electrai, electra  electri, electrai  electri, and their three conjugates. These six interaction result in the formation of three bo. Since each of these six interactions is a varying mixture of cosine plus sine then each will display varying degrees of electronegativity.

Note that we have a curious situation where the bo may represent :

This illustrates that there is a qualitative and quantitative difference between tangential bo and scalar/vector bo. We must also keep in mind that this tangent is a centrode, that it must maintain a net neutrality, and that it is composed of a series of double points. Thus 6 particles, not 3, are formed along this hypotenuse. These 6 particles form a single atom of deuterium.

An alternative view is that on the .5sp level we allow the tangential neutron formed on the .25s1-p6 level to tovacian bond with a second neutron. On the .5sp level we substitute the scalar electrium with a neutron and the vector electrium with a neutron. The result is the formation of a double neutron along the tangent or an atom of deuterium.   Also note that at the .5p-16 levels we form various forms of protium, one as protium, one as its hydride, and the other as a neutral dimer of two neutrinos.

On the .75sp1-p6 level we tovacian add 3 neutrons (tritium) along the sine with 3 neutrons along the cosine. This results in the establishment of the 1s1-2 orbitals which we ll with deuterium and a diproton, respectively.

Let's review this construction process in greater detail. At the .25s1-p6 level our particles assumes the triangular arrangement "single neutron" shown in the above chart periodic chart. Three electrium form a scalar half neutron along the cosine and three form a vector half neutron along the sine. These form a tovacican bond resulting in a tangent or hypotenuse or centrode that consists of an electron (two negative bo), a neutrino (two neutral bo) , and a proton (two positive bo). This final hypotenuse is the result of the creation of two internal hypotenuses being created. These  internal hypotenuses are a single bo, and a double bo or the " electron. These two hypotenuses are essentially exported from the origin to the tangent where they are tovacian summed along the tangent forming a neutron.

At the .5s1-p6 level we replaced the pair of three electrium with a pair of 3 bo. We proceeded as before and produced a single atom of deuterium. At the .75s1-p6 level we replaced the pair of three bo with a pair of triple neutrons (tritium). Ostensibly we would fill the orbitals in the following manner: Vector deuterium would be placed at .75s1 and the scalar deuterium at .75s2. The two tritium atoms are doubled along the tangent yielding the equivalent of 6 atoms of deuterium. These six forms of deuterium are placed within the .75p1-6 orbitals. We place the most electropositive form of deuterium, and the most stable, at .75p1. Conversely, we place our most unstable and least electropositve form of deuterium at .75p6. At 1s1 the cycle begins anew with a new trio of particles interacting along the sine and cosine.

We must bear in mind however that the origin of the .75sp complex is equivalent to the entirety of the .5sp complex. i.e., the .75sp complex's origin is equivalent to a deuterium atom and the hypotenuse of our new .75sp complex must reflect this fact. Traditionally hydrogen, electropositive H (H+), has been listed as a Group 1 element, above Li. But its chemical behaviour is such that it also forms hydrides. As such it should occupy an appropriate position within the periodic chart that also characterizes its electronegativity. This placement would have electronegative H, (*H-), listed as a Group 17 element, above F. Hydrogen also displays intermediate electronegativity where H, (*H- and *H+), should be listed as ranging between H+ and *H- spanning below the elements B,C,N, O, and F respectively.

To account for these electronegativities we must view our final tangent in terms of the origin and the exportation of bo. And the agent of bo exportation is the neutron. The hypotenuse of the .75sp complex may be viewed as a double point consisting of 3 pairs of conjugate neutrons plus one atom of deuterium as the origin. The neutron conjugate pairs will reflect the same relative relationship, in terms of polarity, as did the electron, proton, and neutrino conjugate pairs when forming the deuterium tangent. Within the constraints of the primordial deuterium atom it was possible to produce five types of protium. They were P+P-, P+e-, e+e-, e+P-, and P0e0 = neutrino +.neutrino. The neutrons of this six-neutron complex will follow the same pattern and produce analogous atoms of deuterium. Again, we must view our quaternions in terms of
neutral pairs that acquire the state of charge or the ability to attract and repulse due to their relative orientation to other quaternions thus the notion of electropositve or electronegative neutrons pertains to their relative orientation. We may thus produce six types of deuterium all with varying degrees of electronegativity.

We may view this as tovacian bonding of pairs of three GFT quarks, the first being a pair of three electrium, followed by a pair of three bo, followed by a pair of three neutrons. Alternatively we may view it as the progression of neutron formation. We start with a bo origin, progress to a single neutron, then a double neutron, then a triple neutron. These neutrons, as carriers of bo, are the primordial agents of the PMF. As previously mentioned this model ostensibly has the 31.12 A GFT Interpretation of the Periodic Chart 575 .75p1-6 orbitals lled with six forms of deuterium and the 1s1- 2 orbitals lled with two forms of helium. However the origin also represents a deuterium atom and must be accounted for on the .75p1-6 side of the tangent. But the tangent is a centrode and a double point. (Actually it is a quadruple point, the melding of two centrodes or four tangents.) Thus the two neutrons attributable to the origin stays within the .75p1-6 block attaching to the last hydrogen atom formed at the tangent. This last hydrogen formed would ostensibly be extremely electronegative given that the origin would ostnesibly be extremely electropositive (electropositivity is the PMF's method of exporting electrons). However since the origin must maintain a net neutrality and thus cannot house this strong electropositivity it is passed on to the 1s1 orbital in the familiar form of elecropositive deuterium. The two extra neutrons, now residing in the .75p6 orbital, housed within the HeIV atom, is balanced by the absence of two neutrons in HeII at 1s2. Since the centrode is obligatorily neutral the elements formed along it are neutral however this particular atom of HeIV , formed along the tangent, is a double origin and is particularly stable, and thus inert, due to the wide disparity in electronegativity existing between the origin and
the ostensible .75p6 deuterium.

It is clear that the noble gases form the centrode of the periodic chart.

Each fractional block corresponds to a Caley Dickson construction, thus 0s1-0p6 corresponds to the sedenions, .25s-.25p6 to the octonions, .5s-.5p6 to the quaternions, and .75s1- 1s2 to the reals. These form a 16  16 grid of quarks or quaternions and thus assume curvilinear architecture as that depicted in Figure 31.29. A total of 16 particles, as bo, are exported from the PMF to the centrode. They are the origin (Higgs boson?), 6 from the double neutron (deuterium), and 9 from the triple neutron (tritium). That is a total of 16 bo. Note that the tangent is fully equivalent to the origin. The origin and tangent are conjugates. The origin is the evolute of the tangent. The tangent is the involute of the origin. The origin is the pedal of the tangent thus the bo as origin, being equivalent to the tangent as neutron, accounts for the single neutron as having only one of its bo accounted for. The creation of the 1s1 level accomplishes two very important goals. The PMF exports it agent of change, in the form of deuterium, into the matter realm. This deuterium atom carries all of the instructions and dynamic underpinnings to construct the entirety of the matter realm through curvilinear structures. Just as importantly it establishes both a method whereby the electron and proton preferentially will seek out tovacian relationships and nullies the interaction of matter with antimatter in the process. It does this through the creation of HeII . HeII is none other than interfacial protium. Again, at the interface the electron and proton lose their identity As previously discussed, we would expect this type of protium to be one of the most stable and abundant forms of hydrogen in the universe but it is just the opposite. The reason for this is that it is interfacial and forms along the last centrode thus it is a double centrode. Since the electron and proton are conjugates this forms a double conjugate or the conjugate of the conjugate which returns the original. At the centrode the electron and proton militate against their bonding for they constantly seek to form the conjugate of their bond which is ssion. This completes our addendum to the Janet left step periodic chart.